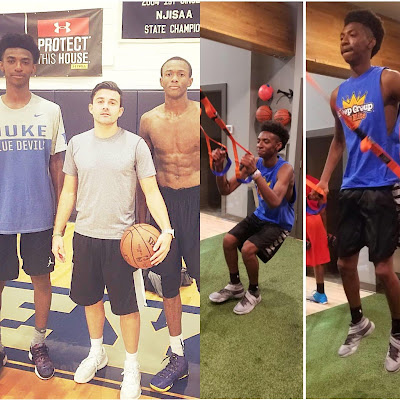 Trey Patterson Getting It In

This is Trey Patterson, signing back in for my 3rd week of ‘Diary of a Baller’. This week was unusually light for me, but I wasn’t complaining not one bit. Due to my active schedule since the start of school, I wasn’t able to get to physical therapy as often as I normally do. However, I was able to make my physical therapy appointment on Tuesday. I attend physical therapy as a preventive method to help decrease any possible injuries, while also working on strengthening weak muscles. I had a workout with my trainer, DJ Sackmann on Wednesday, and a cross country meet on Thursday.


On Tuesday, at physical therapy, my therapist Andrew, really emphasized getting my legs and lower body stronger. In saying that, I did a lot of squats and lower body exercises. After the workout, my legs were so sore, but when I got home, I completed my homework for the night and got a good night of sleep.

Like I said, previously in my introduction, On Wednesday, I had a workout with my trainer, DJ Sackmann at the Ranney School. This workout was very intense for almost two hours. We worked on a lot of moves that consisted of creating space from your defender, we also played a lot of one on one to use those moves against an actual defender and not just a cone. In the one-on-one’s, I was competing against Scottie Lewis, which was a good thing for me, because I had a chance to go up against one of the top sophomores in the country, which helped me work on increasing my decision making on the court. Once I got home, I showered and got something to eat, then I had to review my math notes for a quiz the next day.

On Thursday, I had my math quiz and I thought it was pretty easy and felt I did well. After school, I had an away cross country meet at Princeton Day School. I came in 1st overall out of the 80 total runners. It was very cold and misty out, but once I started to run, my body started warming up, and I felt really good while running the course. After the race was over, I felt like I could have run another 2 miles.

Over the weekend, the weather was rainy and not to great, and I actually had some down time. I was able to have some fun and play Xbox with my friends. The past few weeks, I haven’t been able to play my NBA 2K17 because of my busy schedule. This is how my week went, I hope all of you enjoyed and stay tuned for next week.

Trey Patterson signing off!!! Until next time folks!!