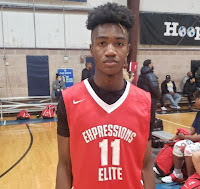 The Basketball Spotlight Clash For The Cup 7th Grade Division brought some fresh faces and usual suspects. Here’s our first look at the top performers.

Clash For The Cup 7th Grade Top Performers Part 2
Aiden Knight Guard (Expressions Elite – Black)- Knight is a strong combo guard and can score a few buckets and locks down on the defense. He doesn’t wow you with flash but instead he does the intangibles to help his team win. He averaged double figures including a 16-point outburst against Riverside Hawks.
Adrial Cantave Guard (Expressions Elite – Black)- This level shot the ball from deep at a high clip all weekend. His confidence and accuracy stretched the defense. He nailed 4 treys against Riverside Hawks and another 3 bombs versus Team Mafia. Don’t let the small frame and nice smile fool you because this kid shoots like an assassin.
Marquis Newsome Forward (Team Jacko)- Newsome was a fresh face that caught my attention. He had his best game against the eventual champion Jersey Ball. He used his smooth wing game to line them up with 25 markers. He was fluid with the rock and showed a serious floater in the lane and nose for the ball.
Kenjai Gatling Guard (Team Jacko)- Gatling rugged style also caught our attention. He’s strong enough to burst through the lane and skilled enough to get buckets. His feel for the game helped him finish with 16 points versus Jersey Ball.
Johnny Magna Guard (Team Mafia)- Magna showed he can shoot it and score the ball. I like his poise on the floor and confidence when he has the rock. The instant outside threat balled out versus Expressions Elite with 18 markers.
Josh Rivera Guard (Team Mafia)- The lanky guard showed some good potential in their final four lost to Jersey Ball. He banged home three treys on his way to 15 points. What makes it more interesting is that it was his first game of the event. Keep an eye on this kid.
Gio Moran Guard (Team Mafia)- The pass first floor general sets the pace for Team Mafia. He was able to get in the lane while also showing a drive, draw and dish game. He also was able to lock in on the defensive end. He hawked the ball 94 feet while pressuring the ball handler and causing turnovers.
Jaise Greaves Guard (KS All Stars)- Greaves proved to be a hard-nosed playmaker who can make good decisions and score the rock when needed. He has a typical NY guard penetrating style with the ability to finish in traffic. His big game came against Team Jacko as he knocked down 15 points.
TJ Brozumato Guard (KS All Stars)- Every good point guard breathe easier with a knock down shooter at his side. TJ provides that for Greaves. TJ made the defense pay for double teaming or rotating late to the rock. He nailed 3 treys against Team Jacko on his way to 13 markers.
Posted by basketball spotlight at 6:26 PM