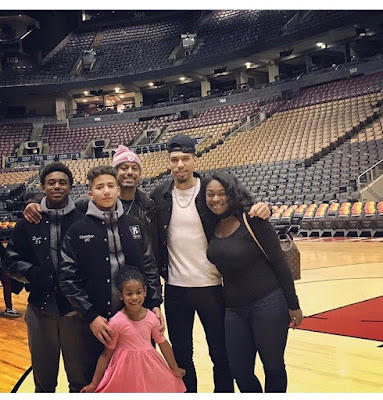 It’s Christian Bliss and I’m back to tell you how my week went.

Monday- We woke up a little late, we chilled in the house for the day. By that time is what time to leave to the game. The game was at 7:30 but we left around 5 with Danny because he has to get there earlier. We watched everyone warm up, personally I learned a lot this weekend already. Everything they is the repetitive, everyone does the same warm up before every game to master it. I watched Anthony Davis and Jrue Holiday warm up for the Pelicans and then went to the family room. We hung out there until the introduction for the players happened. Toronto didn’t play their best basketball today, and lost but still are first seed in the East. After the game it was late and but the time we ate and got back to the house it was midnight. Tomorrow I have to get up early and pack my clothes up and leave back home.

Tuesday- I woke up early today because I have to leave to the airport. By the time the flight landed in New York it was already 12:30. When we left the airport, we went straight to the house got there by 1:30 and then left to school. I got to school right at last period just so I could go to tryouts. Today was the first day of varsity tryouts, I did well I think I am showing why I should be playing up. After tryouts I went home iced up, did some homework and went to sleep. I needed to be ready for school tomorrow and tryouts.

Wednesday- School was fun, had a good day and was looking forward to tryouts all day. After school I took the bus to the high school and got right into it. I put in work again today, today was first cuts so some kids were cut. After tryouts I took the late bus back home which got us home very late. When I got home, I ate dinner and studied for my science test tomorrow. When I finished that I was tired so I went to sleep from 8 to 11 then woke back up and was hungry again. So, I ate Dominos, and then chilled for a little and then went back to sleep. By that time, it was midnight so I had to go to sleep and be ready for tryouts tomorrow.

Thursday- It snowed today, I was hoping it would snow enough for school to be canceled. After school, I took the bus up to the high school for tryouts. Tryouts ended early because the snow was getting crazy and coach wanted us to get home before the roads were getting dangerous. After that when I got home, I took a shower and put some cream on my foot has been hurting me for a couple of days already. So hopefully that pain goes away soon before the season starts. I haven’t seen my family in a long time happy to see them this weekend.

Friday- School went by quick, I was excited for the weekend. After school, I went to the high school today was the last day of tryouts. The coach basically has most of the team set, after tryouts he posted who made the team. I am excited to play this year with my teammates it will be a fun year. I get to start my career high school varsity points early. When I got home, I went to dinner with my mom and spent some time with her then I had to go to sleep and be ready for practice tomorrow morning. Coach said we have to be dressed and ready at 8:45 so I have to be ready for the first practice.

Saturday- I woke early got ready and left to the gym. When we got there, I picked what number uniform I want to wear this year. I chose 10 in my opinion the best number that was left, Demar DeRozan wears it so that’s cool. Practice was good after we spoke about this season and things we need to know. After practice I got home changed clothes, relaxed for a little and went to a game in the city. To say the least we played bad starting with me I didn’t play well, I fouled out on some bad calls. But ultimately, I should have done better, our team will be ready still building chemistry with everyone. We will be ready to play by the time our first real tournaments are around.

Sunday- I woke up late, which for me is 10 then ate some breakfast in the house. Me and my brother went to the Giants game today, finally they won at home. It was a fun game to watch, we then headed back to the house. When I got home, I was tired so I fell asleep for a little. Then I woke up and lifted some weights, my foot is still hurting me but I am working on my upper body only today so I shouldn’t hurt my foot. After that, I got some dinner and had to go the bed for school tomorrow.
Posted by basketball spotlight at 7:57 AM