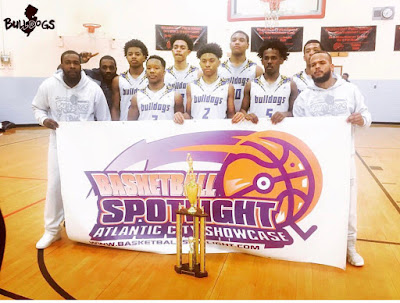 Wussup everyone, this will be my last diary entry I want to say thanks to all of the people who tuned into my diary every week. I hope you enjoyed these past weeks of this great opportunity I had. I want to say than you to Mike Melton and Bballspotlight for allowing me to do this.

Monday: I didn’t go to school my parents let me stay home because I had a long weekend at spooky nook for a tournament. I was still sore from all the games we had, I had 3 Saturday and 4 Sunday. So today was my rest day. I iced my knees most of the day so my they could recover quicker.

Tuesday: I tried something new that I’ve seen a lot of athletes from different sports doing. My brother tried it and told me it will help me a lot. It’s called Cryotherapy, it’s basically when you stand in a chamber looking thing full of ice and it shoots out cold air onto your body for 3 minutes and when you come out you feel great. When I finished the cryotherapy all my soreness was gone. So that’s something I’ll be doing weekly to help my body.

Wednesday: I had practice with my AAU team. We had a big tournament this weekend the AC Showcase we went last year but we came up short in the championship. So, we had to make sure we bringing the chip home this weekend. We lost last year because we weren’t able play to our best ability with the games being close together. But this year we’re ready.

Thursday: I worked out with my trainer to make sure I felt confident in my shot going into this weekend. We worked on decision making when it comes to screens. I’ve came a long way with all my skills and it’s all because of my trainer Erick Myrick. I’ve been training with him since I was in 4th grade. We’re going to keep grinding until I make it to the league.

Friday: I got some shots up with one of my teammates at the gym. So, we could be ready for the weekend. We are on a mission this weekend.

Saturday: We had one game against Team Rio we had to make a statement this game so we could get them back for beating us before. There was no way we were losing to them again. There was a lot of people at the game so we had to put on a show. The stands were packed we started off hot. We were clicking on both ends. Everyone’s shot was falling. This is one of our best starts we had in a while. We ended up winning by 15.

Sunday: It was championship Sunday so it was all going down today. Our first game was against Playaz this was a big game for me and my team. I knew most of the people I was playing against Desean Lecque which is in the group I’m in “22BGFam” so it was going to be a rivalry. The game started good for both teams it was going to be a good game from the start to finish. It was a hard-fought game it was close the whole time we ended up winning by 2 points which put us in the championship. Next up in the chip we played Riverside we played them 4 times this season so and it was always a battle. We fell short so many times in past championships but this one was ours. The game was intense throughout the first half. The momentum was back and forth. We ended up taking the W going home with the AC Showcase Championship.