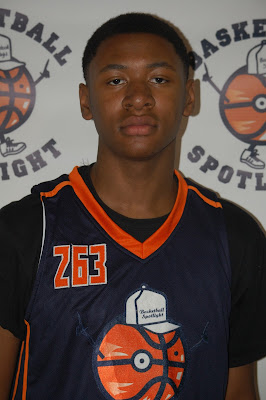 The Basketball Spotlight Future Phenom Camp is in the books. The top talent in the country brought their game to District Heights, MD and we have tons of coverage to release. Here is Part 3 of our Class 2021 report.

Shane Dezonie Guard (New Jersey)- Dezonie capped off his great season with an impressive showing at the Future Phenom Camp. The big guard powered his way to buckets in traffic while also showing that he has improved his play making and decision making at the point guard spot. In transition he’s truly a load to handle. He finished as one of the Top 5 players in the camp. He also played well enough to move up a few spots in our national rankings.

Wilfredo Amaro Guard (Texas)- Another guard with good size to his game. Amaro combines size and point guard skills. He sees over the defenders and is eager to get the rock to teammates. I like how he gets rid of defenders off the bounce and uses quickness to get to the rim. This has some zest to his game and was a big surprise from the Lone Star State. His play earned him a spot in the Top 20 Game.

Robert Noord Guard (Georgia)- Noord has all the makings of an elite prospect coming out of Georgia. He has good breakdown ability off the bounce. He’s more of a scorer right now from all three levels but shows some flashes of being a premier play maker. Finally he showed me some range and accuracy on his jump shot which will keep the defense honest.

Jake Koverman Forward (Maryland)- Koverman has the swagger now when he’s competing against the best players in the country. He’s been growing in height rapidly the last few years and now his game is catching up with his size. He was able to put the ball on the deck, finish with both hands and get his shot off against the best in the nation. The last few years I’ve literally seen this kid transform into a player.

Max Regusa Guard (New York)- The point guard is definitely a throwback. He has a text book drive and kick game. He handles the rock low when he penetrates the lane before either using the floater or kicking the rock to the perimeter. He’s a coach’s dream because he doesn’t take many chances and usually makes the correct play.

Ahmad Harrison Guard (Maryland)- Harrison is has versatile as they come and he showed at during the Future Phenom Camp. It’s difficult to slow down a player that has size, ball handling and scoring prowess from anywhere on the floor. I love how he can get anywhere he wants on the floor and either make a play for himself or a teammate. He has been a proven producer for the last few years on the AAU or camp circuit.

Andre Washington Guard (New York)- Good luck trying to stay in front of this kid. Washington zips past defenders like a blur and isn’t afraid to travel into the land of the giants. He has a good compact handle while also displaying top notch court vision. His coach praised him a great leader and these qualities along with his play launched him into the Top 20 Game.

Ya’Qin Staton Guard (Maryland)- When you think of a good shooter with size Staton will cross your mind. He showed he get stick the open jumper or when someone was running at him. He seems to be a total natural for the off guard position. Hopefully I will see more of this kid next year.

Jiaan Sehhat Forward (Virginia)- Sehhat hits the glass works hard in the paint like a true forward but has the range on the perimeter of a guard. After battling for several rebounds he hit a few treys in a row. He’s the type of player you can’t peg into a position. He’s just a basketball player.


SUPER SKILLCASE 2016 COMING IN NOVEMBER
Posted by basketball spotlight at 8:29 AM