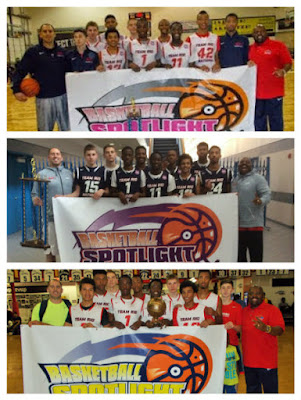 This year the 8th Grade Division of the Basketball Spotlight circuit was a truly a treat to watch. They gave us some exciting action and break out performances by some top talent. We will be sad to see the Class of 2019 go and they will be missed. Here’s our farewell awards for the Class of 2019.

Team Of The Year: Team RIO National
This squad dominated throughout the country all season. They won the Basketball Spotlight Winter Warz, AC Showcase and Memorial Day Classic. They also added numerous high school level championships to their trophy shelf. Basketball Spotlight has had many teams that were dominant on the 8th Grade circuit and now this group can throw their name in among the best. 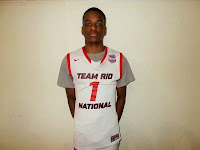 Player Of The Year: Bryan Antoine (Team RIO National) Many predicted a breakout year for the combo guard and Antoine delivered. The silky smooth guard displayed all facets of his game against the top players in the country. He can score the ball with the best of them while his improved play making and aggressiveness has taken his game to new heights. He’s now has entered the national stage and is regarded as one of the top guards in America. 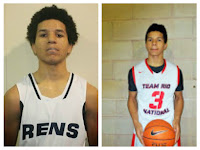 Most Outstanding Player: Cole Anthony (NY Rens & Team RIO National) Anthony started the year out carrying the torch for the NY Rens. The scoring guard proved that he could put up big numbers against any type of competition. He had big outings at Tip Off Classic, Winter Warz and Clash For The Cup. He then switched over to national power Team Rio and helped them win the MDC among other events.

Coach Of The Year: A.D. Gaffney (Team RIO National)
Many skeptics will try to point at the talent that he possessed by many that know basketball understands how tough it is to keep those ego’s in check and motivated talented players throughout the season. Gaffney led this group as they buzz sawed through many major events and rarely played down to the competition level. If they were favorite to get you out of there, they got you out of there.

Newcomer Of The Year: Adeleye Oyekanium (Harlem Jets) This kid was a walking double-double this year on our circuit. As the season went on he displayed more versatility in terms of stretching his game to the perimeter. But don’t think that he forgot where his bread was buttered because he still went inside and crashed the boards when needed. He was one of the main reasons for the Harlem Jets success. 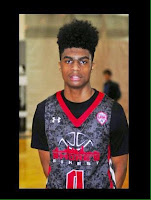 Best Scorer: James Bishop (B’More Finest)
They say some players can score like we breathe and you can add Bishop to this category. Teams knew he was the go to man and designed defenses to slow him down to no avail. The southpaw catches fire quickly and will drop buckets from all three levels. He has added his name to the list of pure scorers that came through Basketball Spotlight.

Best Playmaker: Eligah Wenn (Harlem Jets)
While Oyekanium did the dirty work inside Wenn handle the guard duties. The strong point guard gave opponents fits be driving the lane at will and either scoring or dishing the rock. When he showed up the Jets always made deep runs in the tournament including winning the Tip Off Classic. 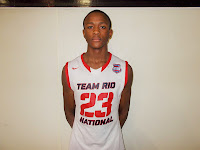 Defensive Player Of The Year: Scottie Lewis (Team RIO National) This award usually goes to a big man but Lewis gets the kudos because of his play and versatility. He played the passing lanes like Deion Sanders while also leading the squad in blocks shot. His presence on the trapping defense made it difficult for any squad to bring the rock up the floor. He also turned himself into a rebounding machine at times. 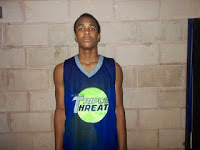 Sportsmanship Award: Dontae Scott (Philly Triple Threat) Scott’s squad didn’t achieve the success they did in the past but he still brought his lunch pail every game. The wing forward played hard buzzer to buzzer and continued to show improvements in his game. He had a successful Spotlight career and this should carry over into high school. 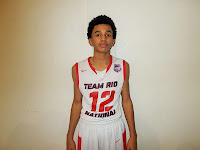 Best Floor General: Jalen Gaffney (Team RIO National)
As stated in our feature Gaffney stepped up on the scene this year to run the show for the powerful Team Rio National. He made sure the rock with distributed and knockdown the open shot when left alone. As Gaffney confidence grew it raised the level of his teammates and their success on the floor. 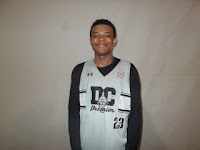 Most Versatile: Marvin Price (DC Premier)
Price showed the ability to dominate a game inside for years but this season his improved perimeter skills stood out. His drives the lane like a true wing and now has extended his range to the three point line. His strength makes him very tough to defend because he can bully past smaller forwards or use quickness to dance around big men. 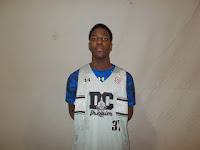 Best Prospect: Mahki Mitchell (DC Premier)
Standing 6’8 Mitchell wing skills make coaches on the next level salivate. When he’s creating off the dribble and his jump shot is falling he’s looking like one of the best players in America. He’s a matchup nightmare and has proved this all around the country.

Most Improved: Papie Roberts (Newark Pharaohs)
Roberts came out this season and made a name for himself by going to war with some of the top guards in the country. He put up tremendous numbers as being relied on to carry the scoring load for his squad. His pit bull style of play gave him that needed edge.
Posted by basketball spotlight at 9:31 AM