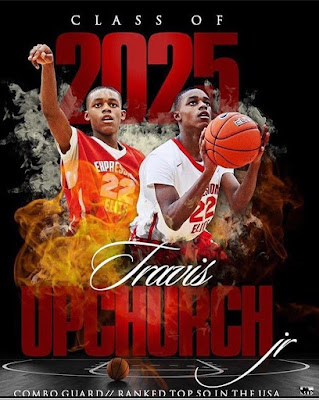 Hello Basketball Spotlight World,
It’s Travis Upchurch and I’m back to tell you guys how my week went.
On Sunday, I tried to remember some of my poem for school. I dribbled on my dribbling trampoline for thirty minutes. Then I did one hundred push up with one hundred fifty sit-ups. Later that day I worked out for a hour straight and worked on straight shooting and off the dribble shooting.
On Monday, I remembered my whole poem for school and delivered it. Then I worked out for two hours and a lot of ball handling and off the screen work. I also put up a lot of shots and then ran a mile. I finished the night off by doing forty pull up and ninety sit ups.
On Tuesday, I woke up did eighty pushups and eighty sit ups. After school I played king of the court for one hour with the seniors and juniors. When I got home, I dribbled on my dribbling trampoline for thirty minutes before studying for my school project.
On Wednesday, I woke up and ran a mile and did eighty sit ups before going to school. After school I headed right to the gym for a workout and played pick-up games for three hours. In the pick-up game I worked on getting to my spot and more screen work including pull ups. I finished the night with ninety push-ups and thirty pull-ups.
On Thursday, I just studied for my class and ran two miles. After I took a little nap, I played my brother in 2k and madden and of course I won. Next, I dribbled on my dribbling trampoline for one hour before doing one hundred crunches and fifty pull-ups.
On Friday, after school I dribbled on my dribbling trampoline for an hour and put-up shots for thirty minutes. I finished all my homework right before we left for Made Hoops. We didn’t arrive to Pennsylvania until 1:00am.
On Saturday we had one game against NJ Scholars and beat them by 17 points. We played really good as a team and as I set up my teammates. The rest of the day we chilled as a team and played PS5.
Posted by basketball spotlight at 12:06 PM