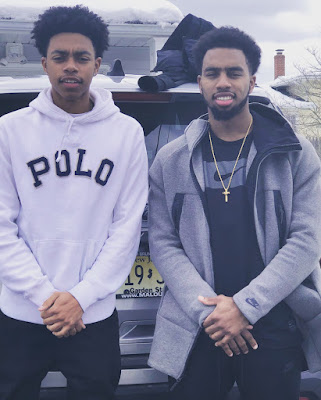 Jaquan and His Brother Jamir

What’s Up Basketball Spotlight World, It’s Jaquan Harris and I’m back with my Diary Of A Baller. Here’s how my week went.

Monday: After school I had boxing, I was looking forward to going today because my trainer was going to show me some new things. After we did all of our lifting and conditioning we put on the gloves and he began to show me scenarios where I could use different types of punches throughout the time I was there. I’m always open to learn new things but when it’s something that can help me my whole life I’m always ready to listen.


Tuesday: During school I was still sore from the night before but I still had to train again later that day. I had a good workout I felt like I shot really well. To a point when I was going at least 8-10 from every spot at the 3-point line. Once I get my jump shot going in games I’m really hard to guard no matter what level I’m playing at. When things like that happen, I think about how much improved through these years I’ve been playing basketball. I went from nobody knowing me to half of every gym I’m in knowing my name and how good I am. But I’m not done grinding can’t wait until all of this pays off but I know it’s coming soon.

Wednesday: After school I sat down in my room and thought about my goals for the rest of this year. I also thought more into what I’m going to do for high school, I know where I’m going and it’s going to shock most people. I’m getting closer and closer to my dream and I’m not stopping now. One of my biggest goals is to make a statement of my family’s name everyone knows my brother and I want everyone to know me also.

Thursday: There was a big snow storm so I wasn’t able to go to school or get to work out like I wanted to. I did what I could in the house with dribbling in my basement. I played my Xbox for most of day and shoveled when I had too.

Friday: My big brother was coming home for a week for spring break. Once we picked him up from the airport he wanted to go to the gym that night he got back, but we told him to chill for a day so we all can do something. My little brother had a game so he wanted to see him play since he hasn’t in almost a year. It was good for him to see how much he improved since he left, he was a little mad that he missed him grow into the player he is but he was cool with it.

Saturday: My brother and I worked out early in the morning with our trainer for 2 hours. It felt good to shoot with him again and he felt good just being in the gym back home. I haven’t had someone else push me while in the gym for a whole except my trainer. We ended up going to train again in the afternoon then chilled for the rest of the day with our family. We all went to Friday’s which we don’t usually do because we are all usually busy.

Sunday: After I trained in the morning my little brother had his semi-final game at a gym we usually are always at. But Jamir hasn’t been there in a while. When he got there everyone wanted to talk to him even people we never talked to before. I saw a coach for a school I might go to next year so it was good for me to talk to him with my dad and my brother. But the decision is coming soon. I appreciate my grandfather Anthony Harvey for reading all of my diaries.