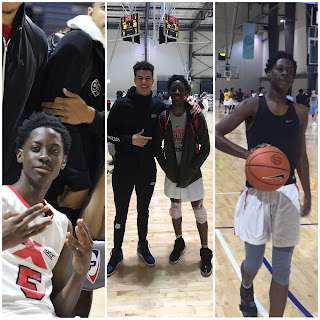 Wassup Basketball World?
Terrence Clarke signing back in for week 9 of my Basketball diary. I hope everyone had a great week and was productive. My week went pretty well but didn’t end as planned.
Monday I was dog tired and went to classes pretty late due to getting back to the dorm at one in the morning and oversleeping. However, I got through all of my classes in a breeze to get through the day to get back to sleep. After school, we went to track practice and went back to dorm to rest. Since I had another session of EYBL, I knew working out would be perfect for me, but I needed to rest my body so I could perform well.

I got to my classes on time and got through my day pretty quickly on Tuesday. I planned on working out after track practice to keep my game tight for the weekend. But after track practice, my knees started to become sore, but I overcame the problem. I simply worked to my best ability and iced them after. The workout was pretty light, and I got lots of shots up off the dribble. After, I went to dorm to shower and went to dinner then study hall.
On Wednesday, I had the day off and went home after school. After track practice, I went to dorm to shower. I went to dinner, then study hall to finish my work and before I went to the gym to workout, my coach appeared. I decided to give it my all in the gym the next day, but for the night, I would ice up and lay down in my bed. I watched some movies and fell asleep.
Thursday started early. I went to the barber shop early at about eight in the morning. After, I walked for about 20 minutes to the Dorchester YMCA gym nearby to workout. I clocked in at about 10:50-11:00 and clocked out at about 12:50-1:00. I put up lots of shots since the gym was empty more than usual when I was home. I went from end to end to put up shots, put myself into in game situations and worked on my handle and catch and shoot with a man that got my rebounds. After, I got something to eat and went to another gym, Huntington YMCA. I played lots of pickup basketball and won about ten games in a row against kids my age and older. I also had practice, so I had to stop playing at one point. I left the court with a win and got something to eat before practice. Once I left, I took the bus to my friend's house then got a ride to practice. The practice was a light one, and we went over plays for the weekend.
Friday started early with a nine o’clock flight. We were on our way to Atlanta for the week for our second session of EYBL. Our first game was at eight o’clock. We arrived in ATL, but it took a while to get rental cars and get to the hotel. We had no time to rest once we got to the hotel. We put our stuff down and got right back into the car to the gym. Our game time changed due to Nike putting two games on the same court at the same time. We ended up playing at 9:30 and on another court. This took me out of my zone, but this couldn’t be my excuse. I didn’t play well and finished with a lost by 10. This brought us down but we erased the lost and continued for our next game the next day.
Saturday started early with an eight o’clock game. The slump continued, and we lost again but by a larger margin. This made our weekend, even more, tougher than usual. We couldn’t make the gold or silver bracket, so the last game wasn’t very important. We played our next game and won by 20+. This ended our weekend in games, and we had to watch for the rest of the week. I watched lots of top teams including Cal Supreme, Team Final, Howard Pulley, and more. This made me realize that if I can’t play hard, I can’t play at all. We went back to the hotel and went to sleep for the next day.
Sunday was much of a learning day. I watched some of the same teams and more to learn what I can take from the game. My unfortunate habit is not playing to my best ability and not as hard as I could. I watched all of Expressions 17u game. Even though they lost by a large margin, I took out of that game that as much as the talent is needed, the work needs to be put in also. I ended up watching our 16u win the silver championship to qualify for peach jam. After, we went out to eat and got ready to leave to get back home. I got my food, seen Jordan Tucker and got gear from him, and left for the airport.
As I close this entry, I’m getting myself more and more rest for better weekends. My body is sore and tired. I’ll be putting in work during the week, but I’ll also be getting much rest and ready for big camps and tournaments.
Stay Blessed!
Instagram Handle: TerrenceClarke_
Twitter Handle: TerrenceClarke_

Posted by basketball spotlight at 6:56 PM