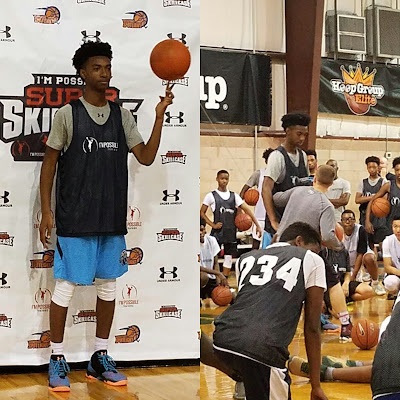 This is Trey Patterson signing back in for my 8th week of ‘Diary of a Baller’. This past week was very action-packed.

On Monday, I went to school and then went home and completed some homework for the night.
On Tuesday, was my last cross country meet of the season. To be honest, I was not in a mood to run, but I pushed myself and I ended up finishing 2nd place overall against Newark Academy. I ended my cross country season on a good note, and I am proud of how I finished the season. Now, its time to shift my attention and focus on my final middle school basketball season.

On Wednesday, I had a workout with my trainer DJ Sackmann in Wycoff, NJ. Every time I get in the gym with DJ its always intense. Some of my teammates were also in attendance, so it’s always good to get in the gym with them as well. We worked on a lot of drop and split dribble moves and variations of those moves. Also, played a little 2 on 2 out of the pick and roll situation.

On Thursday, it was an exciting day at school, with much buzz surrounding the 8th grade drama class production play, Shakespeare’s Winter’s Tale. I was especially excited because I had landed one of the lead roles in the play as Polixenes, The King. Many weeks of stage planning and rehearsing went into this performance and the day has finally come. I was a bit nervous before the play started, as this was my first play with such a big role, but as the play went on, I started feeling comfortable and confident in my role. Based off of the feedback I received, I believe I did a Great Job and everyone was very impressed. Later on that night, I had another workout with DJ. At the workout, we worked on a lift dribble and formed moves around that. We also worked on step-backs and spin dribbles while keeping the ball in the same hand. To close out the workout, we played 3 on 3 games to work on putting some of those moves into live action.

On Friday, this was an off day for me, which was good, because I was sore and tired from my intense workouts during week.

On Saturday, I took this day as an opportunity to study for some tests that I have this upcoming week, on Tuesday and to finish my homework. I also went to one of my friend’s football game at St. Joe’s high school in Metuchen. After the game, we hung out a bit at his house playing Xbox and having fun catching up because we haven’t hung out in awhile.

On Sunday, I went to the I’m Possible Super Skillcase at the Hoop Group Headquarters in Neptune, NJ. This session was for the high school group, 9th-12th grade. I attended the high school session, because I wanted to challenge myself with the older group, and I felt like I could hold my own against the older players. I got to compete against some of the top high school players around the tri state area, which was good….

Trey Patterson signing off.
Posted by basketball spotlight at 6:55 AM